We are a family farm located Matha, a small town in the Charente Maritime 20 km north of Cognac in the area bounded naming Fins Bois.

You can come visit our winery and our operating upon appointment throughout the year. I will personally guid you to visit the property. You can discover all stages of manufacture of Cognac and Pineau des Charentes: the cellar of the old material, a still from the 50s, the cellar aging Pineaux the cellar water spirits ...

The property is surrounded by a park which has taken root in many species of bamboo and various plants. You'll discover and relax in a pleasant and green. (See our website about bamboo)

Charentais interior has been restored so that you can account for what the daily life of our grandparents.

The visits will conclude with a tasting of our products.

Production : limited to 80 hectalitres/hectare (hl/ha) for Cognac production and 50 hl/ha for the production of both of the Pineau des Charentes.

Cultivation techniques : we feed our vines with organic fertilizer, treat them each separately and only when necessary, and allow grass to grow between the lines of vines.

Wine production : the fermentation process is carefully monitored by the Cognac Oenologie Laboratory in Cognac. They also monitor the Cognac and Pineau des Charentes as they mature.


The distillation takes the form of two heatings, following a traditional method, and using the alembic. For the first heating, white wine from the fermentation process is put into the boiler and brought to the boil. As it evaporates, the liquid is collected, as what is known as le brouillis, which is between 28 and 32 % proof. This opaque liquid is returned to the boiler for a second distillation, or bonne chauffe.

This second heating is more gentle that the first as some separation must take place. This separation isolates the head, the tail and the seconds from the heart. The tête is made up of the initial vapeur, which is very rich in volatile substances which are not required. The tails and the seconds are also put aside for reasons of quality. The heart is a clear eau-de-vie of 71% volume, which, once aged, becomes Cognac.

To successfully carry out a distillation cycle, which takes 24 hours (12 hours for each heating), a lot of attention and know-how is required. Each variable (such as proportion of fine sediment, the residue at the bottom of the barrels, recycling the seconds and the tails into the wine, monitoring the temperature curve) is important in its own right and has a significant effect on the character of the final Cognac.

Each distiller has their own ancestral method which can never be revealed.

The Charentais alembic or Pot-Still

Boiler : The base is convex (increased resistance) and very thick. The thick base retains and regulates the heat: it stores the energy emitted by the heater and transfers it evenly to the liquid. This allows the passage of all the substances that make up the wine to be regulated and a steady transfer to the coil.

Cowl and Swan's Neck Pipe : The cowl and the swan's neck pipe represent the main corrective parts of the Charentais alembic. During the distillation, certain alcoholic vapours condense in these areas and then return to the boiler. This vapour recycling is effectively a correction, constituting one of main differences of Charentais distillation. There are four different styles of cowl, or still head. The onion shape is the most widespread as it returns the most liquid to the boiler. The swan's neck pipe channels the alcoholic vapour towards the coil.

Pre-heater : Not all installations have a pre-heater, as if it is used incorrectly, the quality of the eau-de-vie can be harmed through oxidization.The aim of the pre-heater is to reduce the time and energy used by heating the wine before it enters the boiler using the cooling vapours as they pass.

Coil : Within this element, the condensation of the alcohol takes place; the liquid is formed here as well as the cooled to the desired temperature. The water contained within the pipe which remains in contact with the surface of the coil creates the condensation of the steam through thermal exchange, then provokes a change of state and cools the liquid by the transfer of energy between the two liquids of different temperatures.

The Coolant or Cooling Pipe : This is pipe full of water where condensation and cooling of the alcoholic vapour and then liquid take place. Cold water is added from the bottom, against the flow of this liquid. Unlike the cooling techniques used in micro-distillation for example, water is not introduced under pressure; this is to avoid breaking the thermal equilibrium of the cylinder. It is within this section that there is a significant temperature gradient (10°C at the base and between 70 and 80°C at the top).

The alcoholometer (alcohol monitoring tube) :  Thermometers and Alcoholometers can be inserted to examine the distilled liquid. It allows the distiller to continuously monitor the amount of alcohol in the distilled liquid and their cooling temperature, so as to filter it before putting it into barrels. The most volatile, undesirable substances in the liquid evaporate here, thus avoiding their accumulation in the eaux de vie. It also allows samples to be taken for sensory analysis when the distiller wants to make a cut. Also, it makes it possible to separate the head, heart and tail. 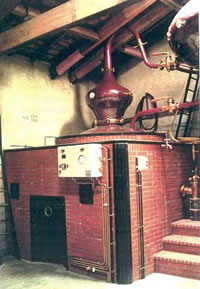 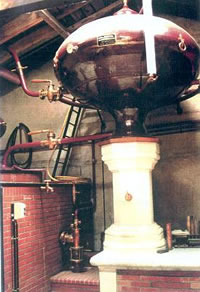 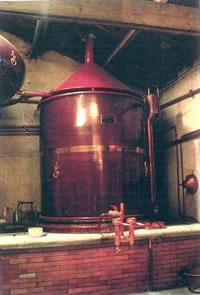 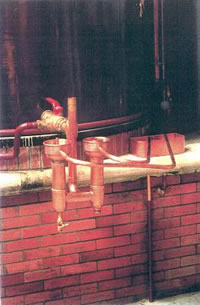 We attend numerous wine fairs all over France. To find out when and where forthcoming events are taking place, see our News section. If you would like to be invited to attend such occasions, please do not hesitate to contact us by email, mail, telephone or otherwise. All details are available in the Legal Notice section.

We are also keen to attend events in the United Kingdom, if you are aware of any forthcoming events and would like to invite us, please do not hesitate to Contact us.